The present Botanic Gardens area has been established on an area at the base of Willans Hill, which until development was a holding and grazing paddock. Many years were spent in establishing the basic layout, and advance planting of the existing tree cover.

The Gardens were officially opened to the public on Saturday, 24th August, 1969 by the then Director of the Botanic Gardens Adelaide, Mr T.R.N. Lothian.

During this opening ceremony, trees were planted in the Australian native Flora section, by representatives of each of the states of Australia. These trees have since matured, and form the basic framework of this portion of the gardens. 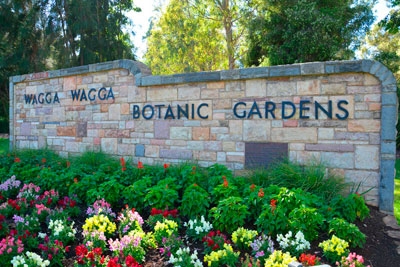 As part of the Australian Bicentennial Celebrations in 1988 the Wagga Wagga Interchurch Council agreed to provide a Tree Chapel for the City of Wagga Wagga. It was decided that this chapel would be provided within Council’s existing Botanic Gardens Complex and a site was chosen on the side of a hill within the Gardens.

The concept of the Tree Chapel was first developed by the Reverend Campbell Egan who was, at the time, an alderman of the Wagga Wagga City Council and the design of the chapel was carried out by Council staff. The Tree Chapel is a bowl-shaped amphitheatre cut into the side of the hill and, during excavation work for the project, a layer of solid rock was uncovered which enabled the alter to be formed by existing rock strata.

This, together with a decision to use rough sawn timber, created a naturalistic atmosphere which blends in superbly with the surrounding bush land. To enter the Chapel one has to cross a water course through a lych-gate and, on entering the Chapel, the dominant feature is seen to be a large wooden cross and altar which are made from River Red Gums.

The Chapel has seating for approximately 100 people on rustic benches, again made of River Red Gums. A further 300 people can be seated on the lawn area in the centre of the Chapel. From the entrance to the Tree Chapel paths have been laid in a circular manner on either side. These pass through groves of trees then to the upper level of the Chapel where, from behind the altar, a superb view of the western part of the City of Wagga Wagga is gained.

The aim of the Tree Chapel was to provide an outdoor worship area and to surround this with trees relevant to the Bible. From the outset the trees were to be a feature of the Chapel and it was agreed that only those plants that had obvious Biblical significance would be used within the Chapel. The Chapel was to be very simplistic and uncluttered and to provide a place where people could worship and meditate within a garden setting. Each tree or grove of trees planted within the Chapel is provided with an explanatory plaque detailing the significance of the tree providing a Biblical reference.

Some examples of plants used were: Palm Trees, to symbolise the entry of Christ into Jerusalem; Olive Trees, to symbolise the story of the agony of Christ; Willow Trees, reminiscent of the lament in exile (Psalm 137). These along with many other plants were provided to the surrounds of the Tree Chapel and are now reaching a stage where the concept of the Chapel is coming to reality and people can walk through groves of trees to view the Chapel.

Work on the Tree Chapel commenced in 1986 with the first plantings being carried out on the 27th July of that year. The Chapel was officially opened with a dedication service on the 21st October 1988. Since its completion the Chapel has seen many uses ranging from weddings and christenings to Scout and Guide services, and church services carried out by a number of religious denominations.

The Chapel provides a haven within the gardens and it is very rare that one walks past it without finding someone using the area as a place of peace and quiet as was intended. The Chapel is floodlit and is provided with power. This enables evening as well as daytime usage and by the provision of power enables music to be available for many of the services. As the Tree Chapel is considered a place of worship one of the considerations of usage is that any wedding ceremonies conducted within it are carried out by a Minister of Religion.

The Tree Chapel is a very public symbol of the cooperation of all the Churches within the City of Wagga Wagga and the community of Wagga Wagga, and is a very lasting reminder of Australia’s Bicentennial with its significance increasing as it matures. It is a very interesting example of the different landscaping concepts and principles that can be applied to displaying plants in a different light and there is always considerable comment on the choice of plants and their relationship to the Bible. 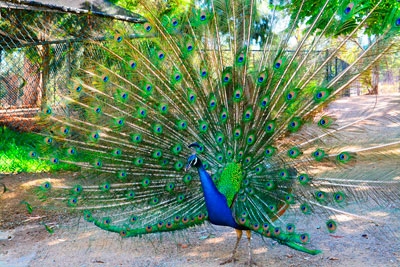 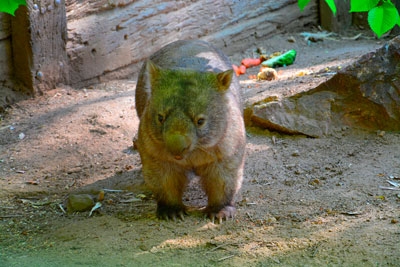 This Garden was developed by the City of Wagga Wagga as a Bicentennial Project in conjunction with the Hume Branch of the Australian Camellia Research Society and the Wagga Wagga Quota Club, both of whom had been interested in the development of a Camellia Garden within the City for some years.

Mr and Mrs Harold Fraser, from the Camellia Society, had been involved with a number of visits to China and had taken Camellia plants to China to establish a Friendship Garden. They had also, some years ago, taken greetings from the Mayor of Wagga Wagga to the City of Kunming.
Over these years the City of Wagga Wagga has developed an affinity with the City of Kunming, the home of the Camellia, and when the Camellia Society together with the Quota Club suggested that the development of a Camellia Garden would be appropriate as a Bicentennial Project, this was enthusiastically supported by the Wagga Wagga City Council.

The Botanic Gardens was seen as a logical place to develop this garden along with a number of other projects suggested for the Bicentennial. One of the aims of the Bicentennial was to encourage communication and closer contacts with overseas countries and the Camellia Garden fitted extremely well into this.

In 1985 things started to move with construction of the garden commencing and taking the next three years to complete. The first plantings of Camellias within the garden took place in August 1986. The site chosen for this garden was immediately adjacent to Council’s existing Botanic Gardens, on the bottom slopes of what is known as Willans Hill. The garden itself covers some 2.5 hectares and had an existing mature coverage of callitris and eucalypt trees which have subsequently proved very successful in providing an overstory for the planting of the Camellias. To enable the site to be developed required construction of 200 metres of brick and rock retait an average height of one metre. Behind these walls were placed substantial drainage systems and approximately 500 metres of specially mixed soil was placed on top of the existing soil. The entire site has been provided with a six foot high chain mesh fence to ensure that the garden was fully secured after hours.

From the commencement of the project it was decided that a central feature consisting of a Chines-style pavilion should be provided to provide the link of the Camellia’s origin. Some work was carried out and plans drawn up for a Chinese pavilion and during subsequent visits by members of Council and citizens of Wagga Wagga to Kunming in China, the Kunming Government agreed to provide the City of Wagga Wagga with a Chinese pavilion as its gift towards the Australian Bicentennial and to cement friendly relationships between the City of Kunming and the City of Wagga Wagga.

The City of Kunming is known as the City of Eternal Spring and the City of Wagga Wagga, the Garden City. This was a natural bonding between the two cities. The Government of Kunming provided four persons to travel to Wagga Wagga. These consisted of a stone mason, carver, painter and the head of construction team who designed the pavilion and water feature.
The Kunming Government in total provided the City of Wagga Wagga with the magnificent Chinese Pavilion, an entrance arch-way, stone lantern and a number of rocks to be used within the water feature next to the pavilion. The majority of material for this was shipped to Australia from China and was an enormous task considering over 5,000 glazed tiles were used on the roof of one pavilion alone as well as the inclusion of carved timbers, rocks and lanterns. The arrival of the material and the Chinese artisans took place simultaneously and construction of the pavilion was undertaken in the winter of 1998.

The pavilion, water feature, entrance arch-way and lantern took the four Chinese men plus many Australian workers eight weeks to construct and proved to be an amazing joining of two cultures, as neither could speak the others language. The majority of the instruction was carried out through an interpreter or simply by using sign language.

There are a number of other features within the Camellia garden which range from seats to bird baths to two very ornate gates and a magnificent moon gate. These were all designed and constructed by Wagga people and were provided by various service clubs and individuals as their gift towards this garden.

Over 200 Camellia species have been planted within the garden, all of which were donated by various institutions and individuals.